Here is the piece regarding The Rock Papers Scissor (RPS) Incident that received coverage all around the world that resulted in refs all over the World coming together and starting their games in the same way as a show of support for Dave.

The case was covered on all media outlets around the World on TV, Radio and in paper form. The above clip is a thorough piece that covers many of the issues with this case.

The case lost traction when it was revealed that Dave had done this many times before and it was not a “one off.” When this information was revealed we retracted our support for Dave who consequently dropped his appeal.

It was such a shame that this ended this way as it really did have some traction and Lawyers were prepared to represent us and Dave Pro Bono (Legal Term work undertaken without charge).

The major positive in this case is evidenced in the fact that many referees defied their County FA’s and The FA and used RPS as a way to decide who kicks off. To our knowledge no referee was charged for “not proficiently applying the laws of the game” for these incidents proving that when refs stand up together, they can be very effective in sending a clear message to the football governing bodies. 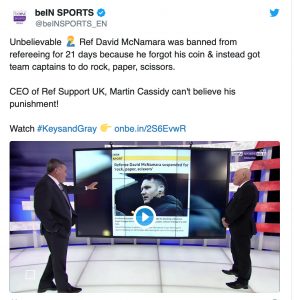