This event could not have been possible without the support of Chris Owens from Findmykit.com

See what they do here. https://findmykit.com

I picked Bobby up late from Bristol Airport due to a combination of the conditions and a Somerset Traffic Jam. The main culprits of the traffic jame being some mud covered Diary Cows.

After a cracking lunch at a country pub called the Blue Bowl we drove Bobby to the beautiful city of Wells and later drove up Cheddar Gorge where Bob said ‘Oh my god I thought the dales were dramatic but this is something else” he then asked “I take it this is where they make Cheddar Cheese?” I was tempted to say “No Bob, that’s Wells Bob” but I didn’t.

Arriving at Paulton Rovers, our hosts for the night, they had already set up the room for the event and promptly made us a cup of tea. This was the first sign of their wonderful hospitality that concluded with a cracking buffet and friendly chat.

The sign of interest in an event is not always just who attends but those who say they will attend but don’t show up. I have hosted many people for events like this and some don’t even bother to say “sorry, I’m not coming.” This was different, I can honestly say I have never received so many calls, messages and e mails before an event on the night, to apologise for not being able to attend due the weather and a couple of other problems. This was a little sign of the esteem people hold Bobby in.

We started the night with a presentation to Rhiannon Stevens who is a 15 year old referee who was threatened and verbally abused by “adult” managers during a youth game. She had sent the idiots off and they asked for a hearing. Rhiannon bravely attended the hearing and the knuckle draggers were found guilty and banned. She is a star that we thought she deserved a little recognition so we presented her with a RSUK #LoveTheWhistle warm up top to a hearty round of applause. 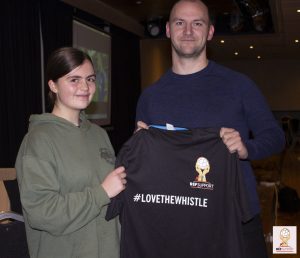 Bobby then started and he immediately had the room in the palm of his hands with a quick honest intro. After a couple of minutes the presentation took a surprising turn when he asked a player from the audience if he would up stand on the stage, this young lad got up in front of everyone and Bob asked him “out of a scale of 10, how confident are you ?” The lad said “About 7” Bob said “ok I want you to sing, can you sing?” the player said “No” after a couple of exchanges about getting him to sing Bob asked “How confident are you now” “3” the lad replied quickly. I was sitting there thinking “where’s this going?” Bob then invited one of the players mates up on to the stage. “How confident are you feeling now?” “5” said the lad. “Why?” asked Bob “Because he is here”….”ahhh” I thought and the penny dropped. After getting another mate up they all sung “Twinkle Twinkle little star” and the got a round of applause. The point was, when you are on your own you can naturally lack confidence, this is normal. With a couple of friends around you will feel confident. Refs however, will mostly be on their own a lot of the time, the teams you are reffing will be in a team of at least 8.

It was a cracking way to emphasise the natural vulnerability of the referee and many pennies dropped in the audience.

We stopped for 20 mins and experienced the cracking buffet and as always at these meeting everyone mixed and had a catch up. I have always thought that the “Half time break” in these sort of meeting are just as enjoyable as anything else as there is just not enough events where we can all come together in a chilled environment. Many said how they missed it and we need to do more of these events…Amen to that I say. Watch this space

After the food break, we presented Dave Bissex, chairman of Paulton Rovers with a signed ball from Bobby as a thank you for their wonderful hospitality and use of their incredible facilities. See what they offer at www.paultonrovers.co.uk 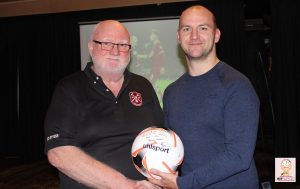 The 2nd half started with a Photo of Bobby In between two players during the Mersey side derby up on the screen. It was Firmino and Holgate with Bobby in the middle after a clash on the touch line. This had made international news and a police investigation. I asked him the Question, “come on Bobby why didn’t you send him off?” His answer gave us a unique insight to the challenges Refs have at this level. We, me included, can be guilty of just judging a refs decision on what we see on telly, because we see it, we think the ref has seen it moreover, we also believe the ref can hear what is said. Bobby explained his decision making and the fact that its hard to hear at the best of times but in a Merseyside derby a few short meters away from the Everton fans it was never going to be easy. He was very honest and said two yellows may have calmed things down however, the interesting point was after the game. 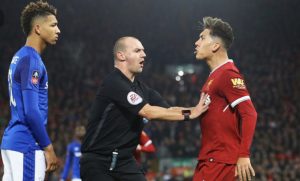 As soon as he walked into his dressing room Lawyers were in there. Now Bobby didn’t say exactly what went on but I want you to think of this possible scenario.

The lawyers may have asked “Bobby Can you lip read?…Bobby answers “ no.” The lawyers ask “Bobby Can you speak Portuguese?” “no” says Bobby. Job done, how can you have credibility in the case? This was a small insight to the pressures and the challenges refs face that most would never think of.

The social media abuse he received was incredible and Bobby put up tweets on the screen showing some of the abuse to him and his children, he also used this to clarify what the difference between banter and abuse was. It was very humbling.

The issues of him leaving the Premier League was explained in a blog he posted on new years eve. He explained the blog was a result of a conversation with a therapist framed around writing your feelings down. The blog received over 40,000 likes and just as many retweets. He has received messages of support from all over the world both privately and public messages.

The BBC flew to Oslo to interview him for Football Focus a prime time football show on BBC 1, the words “Bobby Madley” trended on twitter, Sky sports ran the piece and the news went around the world. This is a gain an example of the profile of the Premier League and the interest in the product.

Fast forward a few weeks and Bobby releases the news that he has been in discussions and he will be coming back to England to referee and the internet explodes again.

We had a Q&A session and again Bobby was as open and honest about his answers. The final comment from a referee in the room was this “ Bobby I and many other refs feel you will be missed on twitter as you have helped so many people with your advice and support. I know refs at certain levels can’t have social media accounts but you have proved that having one can be very productive and helpful. We will miss you. Hopefully that policy will be readdressed.”

Now here he is in a cracking place in Somerset called Paulton Rovers and he has done over two hours speaking about his journey. Most stayed around for selfies, a chat and a well earned pint.

Bobby and I were the last to leave the club after a clear hint from the bar staff who started turning the lights off in the Bar.

There is one thing that is clear. Bobby looked at everyone in the eye and stated “ I made a mistake, I am to blame, no one else but me”

Our reply to that is “Ye without sin, cast the first stone”

Welcome Back Bobby you are a breath of fresh air and one of the nicest men in football.

You can read bobby blog here.https://t.co/kiQPBAWzXi?amp=1

We have another event on March 2oth on Weston super Mare Grand Pier. An evening with Mark Clattenburg.