The message on the photo below was received as a direct response to a video that emerged of a player attempting to attack a referee last weekend.

We believe keeping the subject of ref abuse and assaults in the public eye and on the agenda for discussion, is vital in our fight to making the game safer for all referees.

For far too long many stakeholders in football have wanted and still do want, this subject not to be discussed openly in public. These people and organisations , including County FA’s are a huge part of the problem as they continue to feel that keeping the abuse and assaults of match officials in the public eye prevents people from becoming referees. This attitude is an outdated, insular and disingenuous way to ignore this huge problem in our game. In fairness a few CFA’s have posted about the problem of Ref Abuse but as we said “a few.” This yet again, just like the Arm Bands, Purple Shirts and Green Socks campaign’s, there in no cohesive approach and it’s all very disjointed and certainly not led by The FA nationally.

We currently have the lowest number of referees in our game  and there is no clear plan to address the shortfall or indeed do anything different than before. The “Lemming” approach has gone on for too long and refereeing has already fell of the cliff with no accountability from those inside the The FA’s referees department.

We feel we have a duty of care to inform potential new referees and existing referees that ref abuse and assaults is a real problem and making them aware of these challenges will allow them to be prepared for the challenges ahead and that we are here to support them when they need it.

As we start a new year, we are determined to carry on our fight to address all forms of ref abuse. We will also continue to challenge club’s and player’s social media accounts as well as any stakeholder who thinks refs are “fair game” to be abused on line.
We will also continue to hold to account the governing body of football to ensure all forms of abuse are addressed robustly and swiftly in the coming years.

We welcome the FA’s decision to appoint a legal firm to carry out an independent investigation that begins on January 3rd and we hope they do not miss an opportunity to clearly identify the huge failings that we have identified in our correspondence with The CEO of The FA.

This investigation gives us hope that  The FA, can change the game for better and stop the disenfranchisement of referees and change the culture that if you challenge the FA Referees Department you career is effectively over.

Refs must have a dedicated and independant conduit to voice their concerns anonymously without fears of retribution and ensure that their fears and concerns will be progressed through the proper channels and give them a fair chance to be heard and understood.

We genuinely believe that taking up the whistle is a wonderful hobby and profession to follow however, it is made far more difficult when those who are supposed to support referees are silent in the hope that the problem will go away on its own.

The head in the sand approach need to stop and stop now. 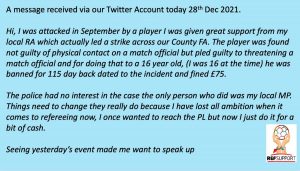