Day One – The Long Journey South

I started my journey at 0110hrs 27/02/20 taking off in a huge RAF Voyager airbus run by a civilian company called ‘Air tanker’. The small fleet of passenger planes are used mainly for transporting military personnel, family, camp workers, veterans and government officials to various locations around the world. As I have plenty of time on my hands it’s probably a good time to start writing my journal, a Christmas present from my wife Shona, to capture the visit in full. In this first part I will try and give an insight as to why this trip is so important to me.

At 2pm local time on Tuesday 8th June 1982 my life was to change forever as I experienced my first taste of war when witnessing the full effect of two 1000lb bombs exploding on the troop transport ship Sir Galahad. The devastation caused by the bombs released by two Argentinian Skyhawks jets led to 48 military personnel and crew members losing their lives and many others suffering injuries some of which were serious and life changing . Over the years I have never really tried to piece together in full my memories of that day before or after the explosion and only ever remember it in small sections. If I’m honest apart from the anniversary and Remembrance Sunday I give it little thought and it’s normally parked for the majority of the year. I’m normally quite good at dealing with traumatic events a trait which has served me well for both my military experiences and over 30 years on the CID and homicide team’s with Avon and Somerset Police.
However over the past few years the memories of that day in 82 have come back stronger and I felt it was time to try and piece together everything I remember and find some closure. There are several reasons for taking this trip the main one being that I will have the opportunity to return to Fitzroy and Bluff Cove and stand at the Welsh Guards memorial, where I stood all those years ago when it was just a makeshift pile of stones, and pay my respects to all those who lost their lives that day. I had been involved in making the very first memorial which comprised of the Welsh Guards emblem (the leek)made out of painted white pebbles. I am told that this is still in place today alongside this wonderful memorial cross.

Early last year I was informed by other Welsh Guards veterans who had revisited the Falklands on an annual veterans trip arranged by Charlie Carty a retired Welsh Guards Major. They all told me how excellently organised it was and how much the trip had helped them personally. As a result I contacted Charlie last year and found that he had vacancies so here I am flying on the Voyager on a 18 hour flight to the Falkland Islands. Thanks to the Falklands Veterans Fund and South Atlantic medal association the costs for the trip are minimal and affordable for all veterans.
I will try and piece together my memories of the conflict over the next 10 days and write them down as I guess there are lots of people I know who are really interested but would never ask in fear of not knowing how I felt about it.

When I sailed from Southampton on Wednesday May 12th 1982 I was just a very young looking 20 year old soldier, fearless and truly excited about the fact I was going to be involved in the conflict. I never ever thought I might die and was naive enough to be led to believe we would go there give a beating to an inferior Argentinian army and sail home triumphant. After all we were part of an elite army and had trained so hard over the years in preparation for war. I think we all thought it would be against the Russians in Europe though and not with Argentina over an island that not many of us knew existed. When I think back now I’m so glad I didn’t have to look at it from an older persons perspective as I’m not sure I would have been quite so brave about it all.

The unfortunate truth for many guardsman on the Sir Galahad is that we shouldn’t have been there. We had many opportunities to be moved onto landing crafts that morning but for one bad decision or another it didn’t happen and we became sitting ducks. To me it just didn’t seem fair I wasn’t a sailor, I was a soldier and trained to face the enemy on land. Now of course I’m thankful that my fate allowed me to come home safely when others didn’t, but back then like many of my colleagues I felt cheated.

The trip across the Atlantic on the QE2 lasted two weeks and was luxury compared to what as soldiers we were used to when training in the UK and beyond. We trained hard both physically and mentally and the machine gun test firing at last light was a real firework display as red tracer rounds lit up the sky as hundreds of bullets were fired into the air by machine guns posted at 50m intervals all around the ship. The reality of war and what lay ahead finally sunk home to me one afternoon as we lined up to have our rifle bayonets sharpened by the Regimental Pioneer Sergeant. I remember thinking how lethal it looked and what it would feel like to use it in close quarter battle. I think it was from that point on that I started to realise that it was serious stuff and as one of the company section commanders LSgt Richie Bevan would say to us every day ‘Game on boys’ ensuring that we all stayed switched on. Richie ended up with some bad flash burn wounds on the Galahad and in true army fashion in those days where banter ruled even at the worse times someone on seeing him on the deck of the ship with burns to his face and hands shouted over ‘Game off Richie’. 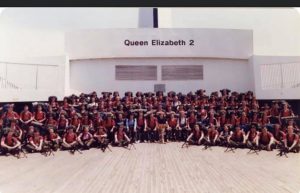 We shared the QE2 with our Household Division friends the Scots Guards and a battalion from the Gurkha regiment. There was a great sense of security knowing that you were going into battle with these little Nepalese soldiers famous for carrying the Kukrie, a small dagger, and a reputation of being feared by armies all over the world. I never gave it much thought at the time but when I think back now it was the Guards who had the better rooms on the ship and the Gurkhas were housed somewhere well below decks in inferior accommodation. Things haven’t changed that much as Gurkhas who have served and lived in the UK for years struggle with obtaining citizenship.
The staff on the QE2 were fantastic, it must have been a massive shock to them one minute sailing into New York past the Statue of Liberty looking after the rich and famous to a ship full of ‘hairy assed Guardsmen’. To be fair they treated us like royalty and we beat the boredom visiting the ships cinema one night to watch the classics of the time that was Rocky 3.

After about ten days sailing we arrived at South Georgia where I caught sight of some enormous icebergs and a glimpse of the captured Argentinian submarine the Sante Fe. The weather was freezing there and the Artic warfare clothing issued before we left was well needed. The QE2 was not allowed to travel further into the war zone so we transferred onto another big cruise ship the SS Canberra which although not as luxurious was still top notch travel for a squaddie. This was to be the last boat transport before setting foot on the Island. We gathered together during the final afternoon knowing that in the cover of darkness we would be battle ready and taken by landing craft to San Carlos Bay and the now famous Bomb Alley. The photo was taken that afternoon and is 7 Platoon, 3 Company (this is a paper copy received from a colleague and has been folded away for many years hence the poor quality). We would later find out that our platoon, from many other platoons on board the ship suffered the least amount of casualties. This was due mainly to our position on the tank deck of the ship, opposite end to the explosion, and a well placed JCB digger that helped deflect the massive fireball away from our area. People have asked me what the ship was like and where we were situated. The best way to describe where we were at the time of the explosion was to imagine the bottom car park area of a car ferry as it was just like that but packed full with troops. The only difference was that they had a big opening in the middle where the ammunition, explosives, and everything else that the boat was transporting was winched out of. It was a good thing that it was open at the time because it allowed the fireball somewhere to escape even if the ammunition and shells started to explode as we were trying to get out. I will talk about this more after we visit Bluff Cove on Sunday for our memorial service.

This has been a long old journey we had a five and a half hour flight from UK to Cape Verde where we had a two hour stop to refuel. The flight from West Africa to the Falkland Islands is another 10 and a half hours. It’s been 28 hours now since I left home yesterday and still another two hours to go. Will sleep well later. We have an hours drive from Mount Pleasant airport to our lodge in Port Stanley. The Liberty Lodge was built for Falklands veterans and is 4 star accommodation. Looking forward to seeing Stanley again I’m curious as to how much it’s changed since the conflict and whether the houses we moved into after the war ended are still standing. 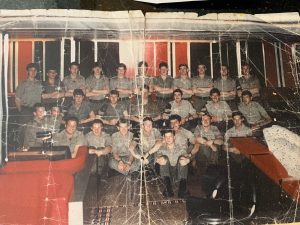 On Board the SS Canberra. I’m 5th left on back row 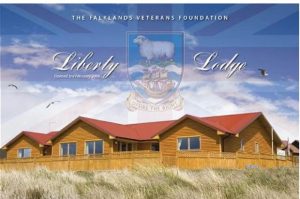