On Wednesday I got my first glimpse of Ajax Bay across the water from Port San Carlos. This is where I was to spend the final days leading up to the surrender. The majority of Argentinian prisoners were held at Ajax Bay in a refrigeration plant. This was also the location for the operating theatre and home of chief surgeon Rick Jolley. He was eventually awarded a bravery medal for saving the lives of many injured persons brought to his field hospital. Prior to Ajax Bay we had been put on another ship the HMS Intrepid, this was a very frightening experience so soon after the bombing. On the ship we received a new weapon and some more new items of kit. This would allow my company to go and guard the prisoners left at Ajax Bay and send out patrols in the surrounding areas as there were reports of pockets of Argentinians in the area. I was allowed to send a short telegram home to my parents to let them know I was alive and safe. I found out on my return to the UK that my family knew quite quickly that I was okay due to a friend Mel from my home town seeing me on the Sir Galahad after the explosion. He suffered flash burns and was taken to the hospital ship SS Uganda where he was allowed to phone home. His parents on hearing I was safe and not injured rushed over to my parents house and told them the good news. Nobody back home knew for several days the extent of the loss of men and it was a great relief to my parents to find out so quick I was safe and well. I still have the telegram sent to my parents days after the bombing.

Photo 1
Ajax Bay can just be seen in the distance the other side of Port San Carlos. It consisted of several refrigeration buildings and a make shift field hospital. 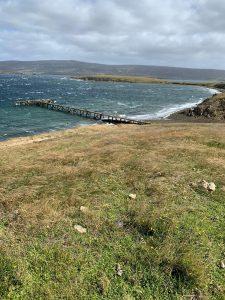 We were eventually taken by landing craft to Ajax Bay and took over the trenches built previously by either Paras or Marines during the first landings. HMS Exeter, a destroyer, was in the bay easily recognised by its blue bottom. I had seen many of the ships previously when attached to the HMS Glamorgan before the conflict. We spent most of the days either guarding prisoners or assisting the medics taking casualties into the hospital. My role was mainly to guard prisoners and spent many hours standing guard over them in the main refrigeration plant. This was not without problems as it was the only building big enough to house them all and it contained an unexploded artillery shell which was very unstable. Although the engineers had done their best to put sandbags around it to lessen the force it made you extremely nervous when stood in the building just hoping that it wouldn’t explode. This along with the poor health of the prisoners, many had dysentery, made it a difficult task. I cannot remember the prisoners causing any problems most of them young conscripts just wanting to go home. After a couple of days all the prisoners were placed on a ship and transported to Uruguay where they were handed back to the Argentinian government. We spent the days after that patrolling the area. On June 14th I went on patrol with my section commander and around six or seven other guardsman. Army intelligence suggested that there were several Argentinians in the area, possibly deserters from the positions around Stanley. We set out and after tabbing about a mile onto the top of the ridge we came across a sentry from a unit protecting a rapier missile unit (surface to air missile launcher) I did not witness what happened next as I was at the rear of the patrol, the tail end Charlie. The story relayed to me later is that my section commander had received the wrong password from Brigade. Fortunately as it was daylight the sentry when challenging recognised it was British troops and did not open fire. There have been several own goals especially at night where patrols have been mistaken for the enemy. However on this occasion we were allowed to pass through and stop at the rapier missile unit positioned on the ridge. We were only at the site for a very short time when the news came over the radio that the Argentinians had surrendered and the white flag flew over Stanley. We shared a drop of scotch with our friends from the RAF and Engineers manning the system.

We moved to Port Stanley a few days later and my company moved into three houses on Davis Street. I re visited the houses after putting an appeal out on the local radio for help in locating them. A local resident Neil Ford came forward and volunteered to show us where they were. When I stood outside the houses I instantly remembered the whole area including the hut and open field where Company HQ were based. We shared a beer with Neil to thank him and he corroborated the fact it was the right location by remembering the booby trap grenade found by a guardsman under a small cup in one of the houses. Neil was a member of the Falklands Volunteer Force and had a new wife and two month old baby at the time of the invasion. He managed to get out of town and travel to Fitzroy where he stayed in a bunker under a house with 30 other people until the island was liberated.
There is one funny little story attached to the house which Neil in being told found hilarious. One night we were celebrating the fact we had been told we were going home at the end of July and the drinks flowed. There was only one piece of furniture in the house an old sofa. I’m ashamed to say that when the peat burnt out that night and we became really cold some clever sod, not me although I admit I was there, decided to smash up the sofa with an axe and burn it to keep warm. In the morning when sober we told the local resident in charge of the houses and he was fine and told us not to worry. The Sergeant Major was having none of it. He marched us down to the local hardware store and unbelievably it had a room full of sofas in an upstairs store. At the expense of the guardsman responsible including me the owner was presented with a brand spanking new sofa to replace the old one which looked about 100 years old.

Photo 2
The house I stayed in during the clear up of Stanley. Scene of the unfortunate sofa incident. 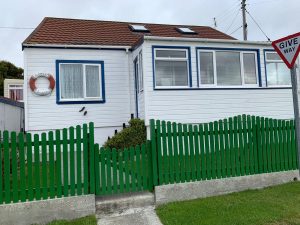 With Liz from Radio Fir the local Port station. We were interviewed about returning to the island and to appeal for information in relation to finding the houses 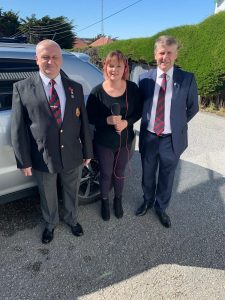 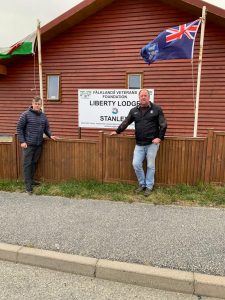 Port Stanley has changed immensely over the past 38 years with lots more houses and buildings. In 1982 my first glimpse of Stanley as we sailed into the bay was of the multi coloured houses and buildings built over a smaller area than today. It was a sea of various red, green and blue coloured roofs.

After the battalion was split up at San Carlos it was great to be all back together in Stanley, although we were spread about the town. There was the odd occasion when I would see a mate from battalion who I believed to be missing. There is no better feeling than finding out that someone is alive it gave us a great lift. The battalion went about helping the islanders clean up the town as the Argentinians had left it in a right state.
The Welsh Guards were desperately unlucky during and after the conflict whilst in the Falkland Islands. One day after the liberation of the island a working party from our Support Company were helping to clear part of the runway which had been bombed. A Harrier jet took off whilst they were close by and a technical failure meant that one of the sidewinder missiles attached was released and exploded near the soldiers. Although there were no fatalities several received life changing injuries one sergeant later losing both his legs. When news of the accident filtered through I think we all just wanted to leave the island and go home.
However we did not leave until the middle of July when we sailed to the Ascension Islands before flying home to Brize Norton to be individually greeted at the bottom of the steps of the plane by HRH Prince Charles the Colonel of the regiment. At the airport we were met by our families, I was greeted by my mum, dad and sisters who were so happy to have me back home safe. It was the first time that I ever saw my dad cry relieved to see my mum so happy after the stress of their youngest child being involved in the war.