We have fitted so much into our seven day stay so I will pick out some of my highlights since the memorial service. The memorial wood was the idea of Tim and Jan who own the garden centre in Stanley. They are massive supporters of the veterans especially the Welsh Guards and their home in Fitzroy is full of Welsh Guards memorabilia. Over the years they have become great friends with Charlie who arranges the trips. On Wednesday night we were all invited to their house in Stanley for dinner. They are great hosts and we enjoy the evening sharing stories. Tim is the guy I spoke about previously who lost his left eye after an explosion near his home. Tim and Jan also run the local cub scouts who look after the wood. The memorial wood is a fantastic place for family, friends or anyone to go to reflect and pay respects to the serviceman and islanders who died during the conflict. The wood was landscaped on waste ground directly behind the main Stanley cemetery and each servicemen who died during the conflict has his own little plot, the place is very impressive. I found Gareth’s plaque and placed a small Remembrance cross alongside it. We also found the plaque for Chris Mordecai the other 3 Company member to have died. Next to his plaque was a photo, he was 17 years old but he looked much younger. 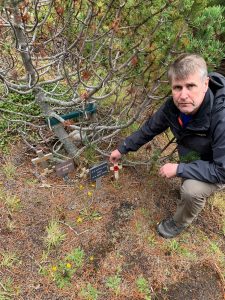 At Gareth’s plaque at Memorial Wood in Port Stanley

On Thursday morning we tabbed three and a half mile uphill to Mount Tumbledown where the Scots Guards fought a bloody battle against some of Argentina’s crack troops. It is a really misty morning and as we approach the top we begin to see the extent of the rocky terrain. I believe that an army with the will to fight could have held these positions much longer as the rocky fighting positions were near impregnable. The remnants of an Argentinian cooker remains on top rear of their defensive positions. On reaching the top we have a moments silence and salute our fellow guardsman who bravely gave their lives to capture this position. The mist then suddenly cleared and you could see all the way to Stanley. It is an impressive sight as you take in the ships in the bay and the size of the town which has expanded over the years.

On Thursday afternoon we were invited to meet the governor at Government House in the centre of town. Thursday was a beautiful day with bright sunshine for most of it. The governor was really busy but took the time to greet us and answer a couple of questions. We were shown around the whole building which was taken over by senior Argentinian officers at the time of the invasion. There is an office that was used as a bedroom by the great explorer Shackleton in 1915. There is also a guest visitor book in the snooker room which we all signed. Everybody used to write their names in chalk underneath the snooker table but there is no longer any room. Names include Margaret Thatcher, Prince Charles and Jeremy Moore the senior army officer at the time of the conflict. When the Argentinians first invaded a troop of marines were ordered to surrender by the governor to prevent unnecessary loss of life. 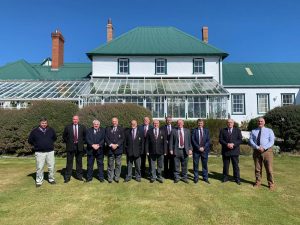 Photograph taken at Government House after meeting the governor of the islands. We share the photo with two marines from 42 Commando.

On Monday we were the guests of the RAF squadron at Mount Pleasant airfield. We were met by the garrison sergeant major and taken to a hangar housing a Typhoon jet. This is Top Gun stuff and the instructor runs through the details of the aircraft. We are all invited to sit in the narrow cockpit something not achieved by all our group. One of our group is a fighter jet anorak and is quickly nicknamed Maverick. We were then taken to the edge of the airfield and watched two Typhoons take off. Both planes taxied past us and both pilots saluted us as we stood on the edge of the runway. It was a great moment. We then watched the take off, the noise was deafening as the pilot powered the plane through tremendous forces to take off literally in a vertical position. I caught the second plane on video manoeuvring the plane this way to make the take off more comfortable. The effect of the G Force on the human body is enormous. 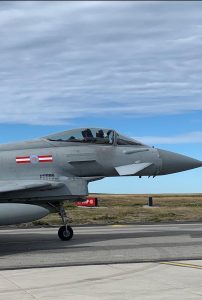 Typhoon pilot saluting us prior to a vertical take off

I couldn’t finish without mentioning football. There is a great museum on the island showing the history of the islands which dates back to the 1400’s when it was the Spanish disputing with the UK for rights to the island. In the museum there is a sports section and shows that in 2018 the FA sent a representative team out to the islands to play the Falkland Islands. I am not sure who played or what the score was so will need to research. I have spoken to a young island player called Ross who resembled his national team to a good Sunday league side in the UK and that refereeing is pretty much non existent with mainly club officials blowing the whistle. There is very little if any referee abuse. I have a chat about my history within refereeing and he tells me that the day after we leave that they are playing the services team from Mount Pleasant and it was normally a big occasion, even if they do normally get thrashed. Maybe we should send some of our worst abusers of referees to the island to see how it is done. It is typical of the way the island operates with very little crime and an excellent community spirit. The welcome we have had from every single islander we have met has been fantastic and very humbling. 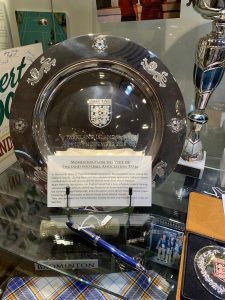 The memorabilia at the Stanley museum commemorating the football matches in 2018 between the Falkland Islands and an FA X1As I sit on the plane just about to land in Brize Norton I reflect on my trip. I’m so glad I went back after 38 years it has meant so much to see that it was all worth it. The Island is flourishing and the islanders will forever be grateful to the servicemen involved in 1982 for liberating them. I am now looking forward to seeing my wife Shona and speaking to all our children and family and especially seeing Dylan my first grandchild. I’m so glad I have been able to share this with all those who have read it I did not want to glorify what happened but just give a little insight from the point of view of a young soldier involved in the conflict. 🇫🇰🏴󠁧󠁢󠁷󠁬󠁳󠁿