At around 5pm local time we set off for Fitzroy again for a evening with the locals at the village hall. On arrival we meet up with 5 members of the Navy ground detachment covering the island. This includes two senior engineers one who was on the island at the time of the conflict. There are 6 islanders present, all live at Fitzroy and one Tim who was present when the Argentinians invaded.

Tim told me a story of how he was stationed in West Falkland with the Falklands Defence Force. The Royal Air Force received intelligence that enemy planes were using his location as a refuelling site and bombed the settlement. Unknown to them it was occupied by 6 personnel from the FDF including one woman. On May 26th Tim heard aircraft above and left his house to investigate. As he walked out the front door he saw two Harrier jets approaching the settlement at low altitude and at speed. He described planes as looking like birds of prey swooping down on its kill. He stood in shock when as the pilot dropped two 1000 pound bombs and as they exploded close to the building he was thrown across the yard. If he had been about 10 foot closer to the explosion he would have been obliterated. Instead he suffered with some shrapnel piercing his eye and blast injuries, later losing his left eye. He wasn’t able to be rescued from the settlement for a week and a RAF chopper eventually arrived to take him to the Field ambulance operating theatre at Ajax Bay. The other 5 people survived the bombing suffering only superficial injuries. Tim is a very intelligent businessman on the island and I am fascinated by his story. This is the first islanders story I have ever heard this one obviously being kept quiet at the time as we wouldn’t of wanted the Argentinians to have known we had scored an own goal against the islanders we were trying to liberate. Tim is such a humble man, both him and his wife have a real affection for the Welsh Guards and are so grateful to all the task force veterans involved in liberating the island.

The presentation was made by the senior naval officer present Chief Petty Officer Ward also known as Sharkey. It is a wonderful gesture and will be treasured by the residents of Fitzroy and well looked after. The crosses have the names of each Welsh Guardsman who died on the Sir Galahad. After speeches from Phil, known as the Mayor of Fitzroy and Charle Carty our senior officer and tour leader.

I have posted photos of the evening below. 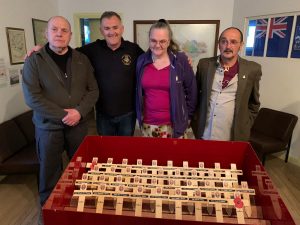 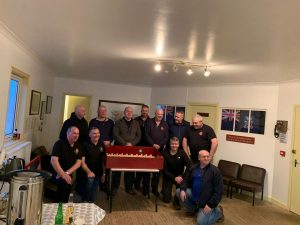 It was a great evening mingling with the locals and the navy guys who were really interested in learning about the conflict. Many of them weren’t even born at the time. After a few drinks and a buffet we headed off back to Liberty Lodge. Driving in the dark in the Falklands is a whole different ball game, the roads are ok but not many are tarmac and there are no lights outside of Stanley. Anyway arrived back safely after a hours drive and had a quick chat about the evening over a beer before heading off to bed. 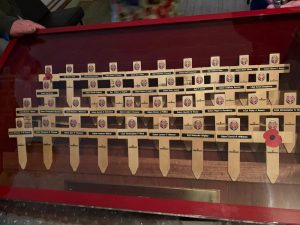