We arrived at Liberty Lodge in Port Stanly round about 7pm local time and settled in quickly before popping down the local for a couple of beers and a chance to have a proper chat with the other 9 veterans. We walked down to the Narrows pub which is run by a local couple and were faced with the harsh wind which is a major characteristic of the Islands. After a couple of hours we were all totally wiped out from travelling so headed back to the lodge battling more wind and rain as we walked back. I looked forward to the morning during which included the day included a trip to Bluff Cove and the Fitzroy settlement.

Bluff Cove is where we waited patiently on the Sir Galahad to get back on land in 1982. The boat had done its job getting us all from San Carlos to the start line for the attack. The only issue was the battalion was now separated because half of the men, including the commanding officer, were transported on landing crafts to Bluff Cove. There weren’t enough landing craft to transport everybody and the weather at that time was treacherous.

On seeing Bluff Cove again today it brought back so many memories especially about how I got off the ship and where I went afterwards. The big difference today was the water, on the day of the bombing it was really calm but today it was really rough and choppy. The beach on the photo taken today is where I landed having evacuated from the ship on a small rubber life craft with a little bit of help from the RAF helicopters who blew us away as we were being blown towards the ships fire effected area. The other photo I copied today from the Fitzroy village hall where I saw photos of that morning that I’ve never seen before.

The visit to the Welsh Guards memorial today was made more enjoyable being in the company of fellow veterans all with their own story to tell. All are happy to talk being comfortable in the company of ex military men. Being inquisitive I have had so many questions answered about what happened that day. For example I had no idea that survivors had got off the ship from both sides and came ashore in different locations. As mentioned previously the hold being open prevented the fireball from going through the whole bottom deck hence preventing myself and other soldiers in my vicinity from suffering serious burns. This has been brought home further when chatting to Dave, a fellow veteran who suffered serious life changing facial injuries the scars of which he still carries today. Dave is a great lad and makes me realise how lucky I was to get off that ship without a scratch. He talks about it with us openly and fills in many blanks for me during the morning.

We return to the memorial on Sunday for our service but we had a quick look round today so we could familiarise ourselves and of course grab a quick photograph together. We also visited the original memorial which I am proud to say that I helped to build after the surrender. The pebbles are cemented down and the staff from the garrison who look after the memorials do a great job. The morning is completed when we bump into two marine veterans from 42 Commando who are visiting the island. We have a quick chat about Sapper Hill where two companies of Welsh Guards and the marines staged the final attack as the Argentinians raised the white flag.
We then walked to the sheep pens at Fitzroy settlement where we spent the night after the attack. 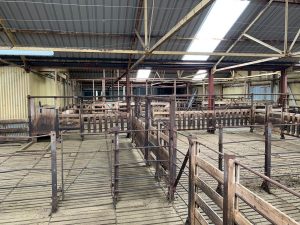 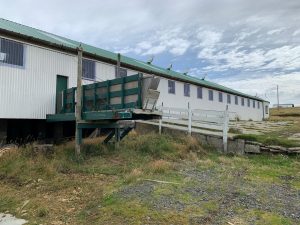 Fitzroy today has only 15 residents mainly older farming couples and there are no children. Some of the residents were there at the time of the conflict and they all have stories to tell. Stepping into the pen the smell of the sheep is overpowering but the last time I set foot in here I was just glad for the warmth and the chance to brew up with some members of 2 Para, just returned from Goose Green, who hearing of our plight shared a brew and some food with our group. The pen hasn’t changed and I find the area where I managed to get a few hours kip before moving on. We were incredibly given some new kit from this location and I managed to obtain some new kit as apart from what I was dressed in everything else had been left on the ship. It’s amazing in times like this how resourceful the army can be and although not having a weapon or any of my artic gear I managed to get a new jacket and some gloves essentials at that time of the year as the temperatures were well below zero at night. The Paras showed themselves to be real comrades in arms that night and although there are many stories of the Guards and the Paras not getting on they certainly went the extra mile to help us out. These boys had just returned from the battle at Goose Green and lost friends and colleagues of their own but still took the time to chat with us and share a hot drink. I will always remember the guys I spoke too during what was a long night and will always be grateful. We didn’t really know what had hit us and it was beginning to sink in how many of the company had not walked into Fitzroy. It was a bit later that we found out who was either killed or missing and that the dead included a really close friend of mine Gareth. He had only married the previous year at 18 and I along with about 10 others attended the wedding and formed a guard of honour. I was his best man. I will talk more about Gareth later but I was delighted recently to get back in touch with his sister Debbie prior to leaving for the island.

This was a brief visit to Bluff Cove and Fitzroy but will be returning in the evening to meet the residents and share a presentation night with a detachment of naval officers one who was involved in helping evacuate the injured from the both the ship and the shores of Bluff Cove. I will write about how the evening went later today.

Earlier in the day we had driven out of Stanley towards Fitzroy about a 45 minute drive and see clearly the many mountainous positions held by the Argentinians in the distance including Mounts Tumbledown, Sapper Hill and Mount Harriet. 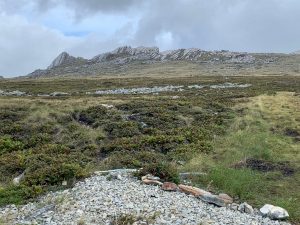 We stop at a memorial for the battle of Mount Harriet where 42 Commando Royal Marines bravely fought where they lost two marine corporals and had a total of 24 injured. As I look up at the objective it is so open with little cover. I am amazed how they have taken thus position with so little loss when hearing how heavily defended it was. You can see from the photo what these brave marines faced that day.  Welsh Guards although very rarely written about were involved in this battle. The recce platoon had secured the start line having set a safe path through the many minefields in the area. Also a team from the anti tanks platoon had fired a missile destroying an enemy machine gun post which had pinned down the advancing marines as they climbed the rising ground towards the positions. 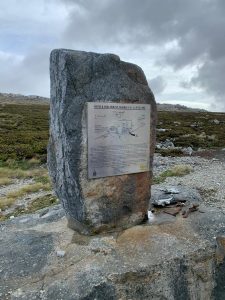 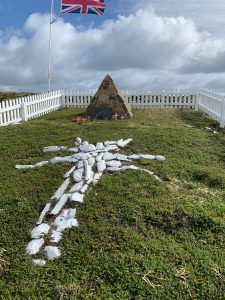 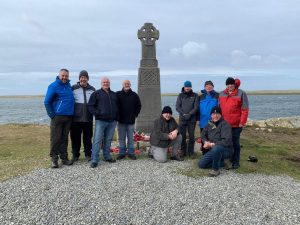 I will leave it here now as I have to get ready for the evening at Fitzroy with the residents. Tomorrow we are going to the Cathedral in Port Stanley and to see some of the local wildlife (penguins) at Gypsy Cove and other various locations nearby.