I mentioned in my earlier blog that I had moved down from Liverpool to Somerset and was enjoying kicking farmers on a Saturday afternoon but was also struggling for money. It was hard and I was lodging with my ex in-laws and wanted to move out to my own place. I was a young divorced Dad and had two children from my teenage marriage. Being a dad of two at 24 and starting all over again in a “foreign” land was far more difficult than I envisaged. Trust me when I say this, Somerset was a foreign land in many ways to me and I couldn’t get my head around the fact that you could pick up a tray of lager and walk to the till with it and pay for it. This and the fact that the local TV/Electronic Shop didn’t have bars on the windows were a couple of the culture shocks I was encountering.

In Liverpool the “Off Licences” were like banks and you had to put your money into a draw and you would then get your 12 cans of cheap lager posted back through the steel draw. Everything appeared so laid back in Somerset, apart from me.

The only way I could see an answer to my money worries was to get a loan. In Liverpool it was very easy to get “loans” but this was Somerset.  I wanted everything in my life to be on the straight and narrow and I wanted to take the legitimate route to increase my cash flow.

I arranged a meeting and met the bank manager in “Midland Bank Burnham on Sea.” I did not know it then but the person I would meet was to be a huge influence on me both as a person and as a referee. The meeting was relatively short; they had looked at my income etc and decided it was too much of a risk to lend me £2000.

I stood up to leave, looked at the bank manager and he had a huge smile on his face and I thought “What are you smiling at? You knob.” I fought my street temper one more time (and won on this occasion), shook his hand, said thank you and left, biting my lip. 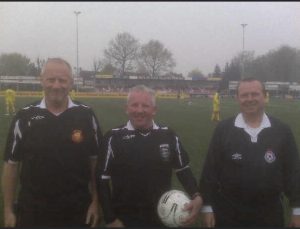 Above. Holland for one of our Dutch Trips with me in the middle ‘smiler’ on my right

It was a busy day for me that day as the meeting at the bank with “smiler” was at 2.30pm and I wanted to see the kids for a bit before rushing back to Weston super Mare to take my refs exam. I hadn’t revised and wasn’t confident that I would pass but I wasn’t going to lose face with that ref who said “Take the course if you think you can do better” as I knew he would be there.

It was 6.30 and here I was at the door of a pub called “ The Heron.”  I had to wait outside like a naughty school boy until my name got called out. It was called and I was directed to go and sit at a sticky red Formica table in the corner of the room until an “examiner” would come and test me on the Laws of the game.

I waited a couple of minutes and was trying to remember to say that a ball was spherical and not round FFS when someone appeared out of nowhere and sat in front of me with a load of paperwork in his hand and said “Hello Mr Cassidy I’m Dave Brammer.’ I couldn’t believe my eyes; it was “Smiler” from the bloody bank who earlier in the day had knocked me back for a loan. To make matters worse he still had that stupid smile on his face.

I had to park my emotions and just said something like ‘Alrite.” The exam started and I felt I was doing well then “Smiler” asked me about “Law 5 Referees Equipment.”  No problem, I thought, I’ve got this one.  I had to name all the things refs have to take out with them on a game. I knew this was a bit of a trick question because they always say “Two Pencils and two whistles, two watches…” I complied verbatim and added Note Book, Red and Yellow cards. I was ready for the next question and he said ‘Anything Else?’

One thing I remembered about the course was the Tutor telling me “If the examiner says “Anything else?” You haven’t answered the question fully.  ”Shit! I thought, what have I missed?”  I couldn’t think of anything and just said, ”No that’s it.”  Smiler said “Coin, you forgot the coin” I had no idea then that nearly 20 years later a ref forgetting a coin would make international news and I would be discussing it live on telly with Andy Grey and Richard Keyes in front of millions of viewers.

I love Dave and he has always been a big part of my life since I took that exam and he passed me by just one mark. I still believe to this day that I failed that exam but he still tells me that he marked it according to the guidelines and as Dave is one of the nicest and most honest men I know, I suppose I may have just passed after all.

Most refs will tell you that refereeing is a wonderful hobby and you do meet friends for life. I agree and Dave is defo one of mine, I just can’t see myself ever falling out with him even though I never did get a loan from him.  I don’t hold that against him… anymore. 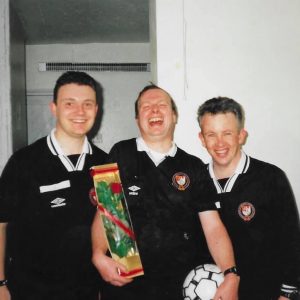 Above. A Rose for the Ref on Valentines Day at Street FC.

I didn’t know it at the time but when I was trying to convince Smiler to give me 2k he was an assistant referee on the Premier League and a superbly gifted and respected match official. Years later I would go to games as his guest and meet other “famous match officials.”

One such occasion was when he was on the line to Alan Wiley a top draw Premier League referee. Many may not know this but when you go as a guest of a match official there are protocols to follow, like being professional and not taking advantage of the excellent hospitality referees and their guest receive at some grounds, including drink.  Not being one for protocol I took advantage and sampled the hospitality a little bit more enthusiastically than I should have. The team of officials had gone to prepare for their match two hours before Kick-off as per protocol and left me in hospitality. Well I couldn’t be rude and just sit there could I? I started drinking almost the moment they left and after a few pints the girl behind the bar asked me “Are you from Liverpool?” I put my finger to my mouth and said  “Sssssh, I’m watching a player for Liverpool FC”… ”Really? Who are you watching?”

I said “I can’t say” I must have looked really convincing holding a plate of curry and chips in one hand and a pint in the other.

I carried this on for a few more pints and then reality hit me that everyone had left hospitality but me and the game had started 10 minutes ago. I had to fight my way through the directors’ box stinking of too many pints of lager and trying my best to look “professional.” It was hard to pull off the “professional look” with a curry stain on the front of my shirt.

I didn’t realise I was out of order until we were walking back to the car and I asked Alan Wiley what does he do as a job, he said “I’m a policeman.”  As he wasn’t very tall I said “Oh they got rid of the height restriction then did they?”  He laughed and walked away but when I looked at Dave that stupid smile of his was nowhere to be seen.  I got in the car and Dave gave me a lesson and how to behave in such circumstances.  Being drunk with a Chicken Korma stain on my shirt and taking the piss out of a very well-respected ref was not on the list.

Over the next few years Dave would guide me and advise on how to act as a Football League Assistant Referee, Chairman of a Referee Association Branch, FA Referee Coach and he’d be a moral compass to keep me on the right track.

I did many lines to Dave when I was climbing the ladder and on one particular occasion, we were at Street FC on Valentine’s Day.  Me and the other Lino Martin Voisey decided to set Dave up.

Just like now, I am a great believer in close relationships with Clubs. How can we get them to trust and work with us if we don’t create relationships with them that makes them aware and just as importantly, us aware of what they like and dislike about refs?

Street were one of these clubs. I had contacted a football league lino called Eddie Martin who owned a florist. I asked him to deliver a couple of Roses to the refs changing room just as the team sheets were being presented. Right on time and with the managers of both teams in the refs changing room, a knock on the door came and the delivery driver said “Flowers for the ref?” Dave’s face was a picture and we made him read the card out in front of us that said “To our favourite Referee, we would blow your whistle any time. Lots of love, your linos.”

Dave had an easy day that day and we all had a pint in the bar afterwards with the Roses in a pint glass on the table. Good days… 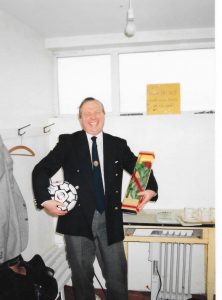 Above. Our Roses and Dave with that smile

Dave was also instrumental in a scheme we set up for Weston super Mare RA where we would take over a dozen refs to Holland free of charge for a weekend of coaching and mentoring. These were incredible trips and really helped the development of referees. Weston RA had a great reputation and some clubs called us the “Trolley Dollies” as we gave kit bags on wheels to refs who attend three of our monthly meetings. This encouraged refs to attend and we had a very strong youth section. We also gave “Buzzer flags” to refs that reached level 4. This was a huge success and almost every year the refs that got promoted to level 3 in Somerset where from our membership. 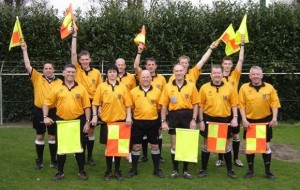 Above. One of our Holland trips.

After such a long term and trusting relationship with Dave he was a natural choice as a Trustee when I was creating Ref Support UK.  If someone had told me 26 years ago that the bloke with a funny smile on his face sitting in front of me in some poxy bank in Burnham On Sea would still be influencing my life in such a positive manner in 2020, I would never have believed them.

I am very proud to have Dave as a Trustee of Ref Support UK and our relationship has been built over a couple of decades. I haven’t told him this, but that smile still gets on my bloody nerves.

The other trustees of Ref Support UK are equally important and just like with Dave, we have known each other for over 20 years. Richard Melinn and Janie Frampton would prove to consolidate our team into a formidable force and voice for referees.

Both have referee experience, drive, intelligence and loyalty. I will evidence this in the next blog as to why they are so valuable to RSUK and make us what we are today.