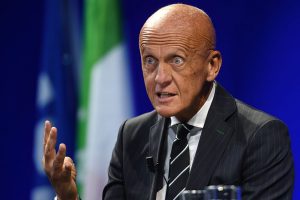 A great piece here written by Martyn Ziegler from The Times

The Premier League have lost control over their use of the Video Assistant Referee after FIFA took full control of the technology protocol.

Pierluigi Collina, the former Italian referee who is now the chairman of Fifa’s Referees’ Committee, will oversee VARs and he has made it clear that he wants the system to be used the same way across the world.

VAR has endured a controversial first season in English football with fans growing frustrated with the technology and its inconsistent use compared to other European league and competitions.

One major sticking point has been the Premier League’s reluctance to allow referees to consult with the pitch-side monitors, which is different to games overseas, in the Champions League and Europa League.

However, FIFA has sent a letter to national associations (the FA) and leagues saying it has taken over all VAR-related activities from the International FA Board (IFAB), who govern the game’s laws.

It means Collina will now be in charge instead of David Elleray, the former English referee who is IFAB’s technical director and had been seen as the chief architect of VAR.

The letter states: “All VAR-related activities will now transfer to FIFA. Therefore, please address all your VAR-related questions, comments or suggestions directly to FIFA Refereeing.”

The Premier League, which has had 94 decisions overturned during the season, expects to push ahead with plans to have a margin of error for offside decisions next season.

The Premier League has also insisted on not using VAR to judge whether a goalkeeper has moved off his line at penalty kicks, contrary to Collina’s wishes, and giving a defender more leeway when the ball strikes their arm.

As well as the reduction in Elleray’s influence, FIFA’s decision means that the four British associations, who have privileged positions on IFAB, will now have less of a voice on the VAR protocol.

The four home nations have one vote each and FIFA has four votes, with any IFBA decision needing six votes to pass a motion.

It will also give former Arsenal boss Arsene Wenger, who is now FIFA’s head of global football development, a much greater say in VAR developments.

Under his guidance, FIFA is set to trial changing the offside law so that there has to be clear daylight between the attacker and defender for an offside offence to occur.