We wake up to a beautiful sunny morning it is St David’s Day and after breakfast we change into our smart suits. The guards would call it ‘suited and booted’. With full ceremonial medals on view and a small paper leek in the lapel keeping in tradition with the regiment on Dai’s day. Some of the polished shoes on display would still not look out of place at Buckingham Palace. We made our way to the memorial where I was stunned by the amount of islanders who have turned up for the parade we are also joined by Sharkey and the navy boys. A female vicar from Port Stanley Cathy Biles has come out of recent retirement to take the service and the congregation includes the mother of Paul Green, one of the fallen, they moved to live in the island in 1983 after the death of her son. The service is very moving as the wind picked up rushing in off the cove and making it essential to hold on tight to your service programme in fear it would fly away. After the Lord’s Prayer every name of the Welsh Guards and attached were read out by the major. I proudly read out the exhortation “They shall grow not old , as we that are left grow old. Age shall not weary them nor the years condemn. At the going down of the sun, and in the morning we will remember them. This is so true and during the service my mind wanders to my good friend Gareth Nicholson 19 years old and who I will only ever remember as the blond haired young man who was always smiling and so popular with his peers. On the photograph I am behind Gareth walking out of church with their bridesmaids. 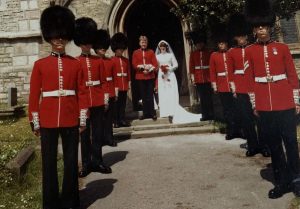 The remainder of the service goes well with a reef laid by an ex Welsh Guards sergeant and another laid by the harbour master of Port Stanley representing the British Legion. At the end of the service there is a small ceremony where the ashes were scattered of an ex Welsh Guards warrant officer who died suddenly a short while ago. It was his wish that the ashes were scattered near Bluff Cove as a result of him losing lots of friends on the ship 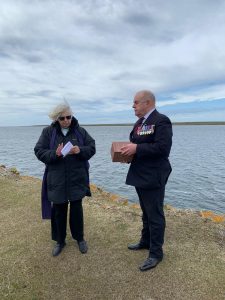 There is time for photographs and then we make our way for a lunch at the Fitzroy village hall. We meet the locals and a couple of us are interviewed by the local radio station. Interviewed by Liz we explain that we have been trying to find the houses we stayed in at Port Stanley after the surrender. We pass over some rough details of where they were located at the top end of the town up a big hill. A appeal will go out over the radio to residents tomorrow appealing for any information. There were three houses used by 3 Company and the owner had two small children so you never know.
We also talk about how good it is to be back and how welcoming the residents have been. We are also asked a little bit about our experiences in 82.
I told the interviewer that I would recommend this trip to anybody who was out here during the conflict as it really helps to see the island and the various parts visited especially the memorials. The conflict will always be part of my life but I think I am receiving some closure in telling my story after such a long time. I will give you my full recollection of that day when I write next as I’m now pretty sure I have pieced things together.

On the way back to Port Stanley we visit Sapper Hill and I witness for the first time the last Argentinian defensive position before Port Stanley. The remainder of the Welsh Guards, not caught up on the Galahad, and consisting of No 2 Company, HQ Company and the Milan Platoon supported by two troops from 42 Commando. After being caught in a minefield they were all brought forward to the start line by helicopter. One troop of marines came under fire and two men were killed. A firefight then took place until prior to advancing up the hill the Argentinians surrendered. Having walked around the position a full frontal assault would have led to many deaths of marines and guardsman. The last British soldier to die in the conflict was L/Cpl Thomas known as ‘Bowser’. He was a despatch rider and died outright as an Artillery shell exploded on top of him as he was riding over open ground on his motorbike. We clean up the cross and plaque before returning to Stanley for a meal at the Waterfront Restaurant overlooking the bay at Stanley. 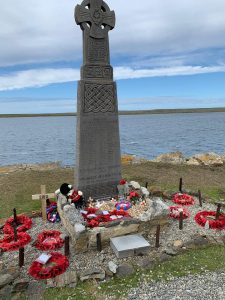 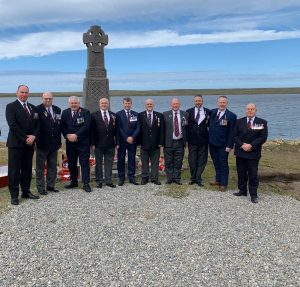 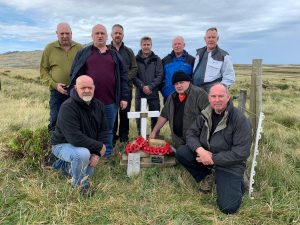 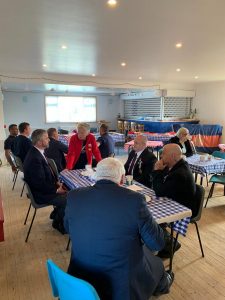