Day 3 started with a trip to the Port Stanley Cathedral to meet the Reverend Ian Faulds. He gave us a tour and showed us the book of condolence dedicated to the fallen during the conflict. He leads us in a short silence as we stand in front of the book and display. The Cathedral is beautiful with spectacular stain glass windows. The colours of 2 Para hang from the ceiling. The structure directly outside of the cathedral is made of whalebone. Opposite the cathedral is the original mast pole from the SS Great Britain. The ship was towed here after running ashore at the Cape of Good Horn and was towed to where it is in dock in Bristol in the 70’s. It’s a small world. 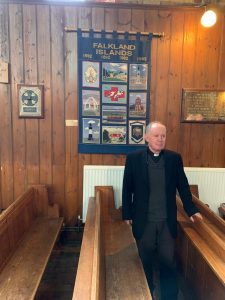 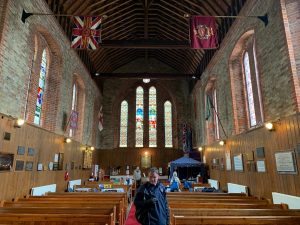 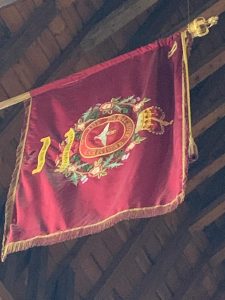 From the cathedral we drive to the HMS Glamorgan memorial situated on the North East point of the Stanley coastline. The ship was hit by a land Exocet and suffered several fatalities. The memorial is situated at a point near where the Exocet was launched.
Not a lot of people know this but I very nearly went to war on this destroyer. In March 82 I was one of five Welsh Guardsman visiting the ship on an exchange visit due to the Welsh connections. We were attached to the gunners and signallers messes and mucked in with the sailors as the ship took part in a huge British naval fleet exercise off the coast of Gibraltar. After the exercise the ship crew were looking forward to 6 weeks leave on arrival back at Portsmouth. The exercise ended with a run ashore into Gibraltar and the famous Hole in the Wall bar. Anybody who has served in the navy will know this place.
However on leaving Gibraltar the Argentinians invaded and the HMS Glamorgan formed part of the task force travelling to the South Atlantic. It is true that when it was first announced near enough nobody knew where it was. I really did think the islands were in Scotland near Shetland. 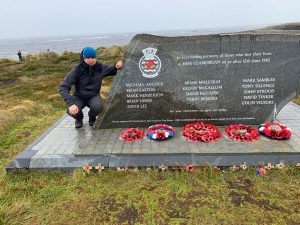 We were very keen to stay with the marine detachment on board and be part of the task force. Quite disappointingly we were ordered by our commanding officer to return to barracks in Surrey. We were quickly helicoptered off the ship onto a merchant navy ship RFA Engadine and sailed back to Truro. I remember being slightly disappointed about missing out on the chance to join the task force but this was short lived as on arriving back we found out that the battalion were to join 5 Infantry Brigade and sail down south on the QE2. 5 weeks of intense training began in Brecon and on May 12th 1982 we were ready to go. We were relieved to find out after the conflict ended that not one of the sailors we made friends with whilst on the ship were either killed or injured.
 
Next we moved onto the Atlantic Conveyor memorial which is marked with a smaller version of a propeller blade similar to one used on the ship. The task force later regretted putting all its kit on one vessel as so many helicopters and so much ammunition and other essential equipment was lost when the ship was sunk. The site of the sunken ship is 90 miles out to sea straight from a point between the two propeller blades. Twelve people lost their lives on the ship when it was bombed on 25th May 1982. 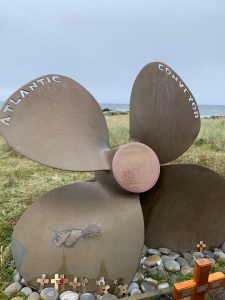 We grabbed some lunch at Shorties Diner before heading off to Gypsy Cove to see the Penguins. Due the possibility of mines in the surrounding area you cannot get onto the beach but we see lots of penguins from safe viewing areas. The penguins are Magellanic and one of the locations is a breeding ground. It is fascinating to see these great creatures in their own environment. 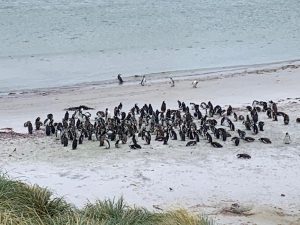 We return to Liberty Lodge and have some dinner a fine curry (medium to hot) cooked by the Major. It not everyday you get fed by a guards officer, even if he is retired. Our final trip of the night is a taxi down to the Victory Bar in town. It is very lively and we soon get to mix with the locals who all love the veterans. The bar is like a throw back to the 80’s with a video nuke box in operation. Karaoke has not reached the Falklands yet but as the night progressed and the beer flowed a few renditions of Delilah and the Green Green Grass of home broke the ice. We enjoyed a great night shared with garrison staff and the locals. This included the owner of the bar who allowed one of his staff to use his vehicle and drive us home when we couldn’t get a cab after last orders. It was a great night and we promised to return before we leave the island.

Tomorrow we will be having our St David’s Day memorial service at Bluff Cove which will no doubt be a very moving morning. I will let you know how it went in the next part.