This resulted in a retraction of the tweets, deleting of the tweet and a public apology from the Chairman of the club after we contacted him by phone.

We know some don’t like some of our tactics, however, we have said from day one that we will challenge all forms of referee abuse.

The account the abuse was tweeted from is still open but has not tweeted since our challenges and the club have started a new account. 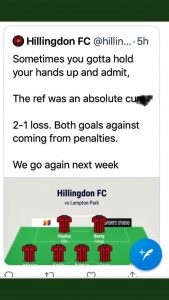 Social media abuse is, in our opinion, the fetal stages of ref abuse and, if left unchallenged, will escalate the desensitisation of ref abuse resulting in further abuse and an increase in assaults on match officials.

Two years ago, we posted this about the future of referee abuse if left to evolve;

“If we keep allowing abuse in all of its horrible forms to go unaddressed, the approaching car crash could involve you. #lovethewhistle”

You can read the full article by clicking here. It would seem that there is still much work to be done. Have you been a victim of referee abuse? We have a free support and advice line available to you 24 hours day, 7 days a week.