This part of my journey starts in a negative tone. This is done on purpose as it builds a picture of why the next trustee of Ref Support UK (RSUK) is so important to me as an individual and the creation of RSUK.

The next trustee I want to tell you about is about Richard Melinn and another very close friend of over 25 years and someone  I trust with my life.

Part One “The Flintstones”

Attending County FA meetings was always an endurance test for me, some say it still is for them. You often find “badge collectors” at these meetings who love the title but don’t really educate refs and they repeat almost verbatim Laws and procedure. These same people can never understand why they struggle to get people to attend unless the meetings are compulsory such as promotion or Cup Final seminars.

At one of these compulsory meetings I was very surprised to be greeted by a “hello how are you doing ?” rather than a clear policy of ignoring people until they felt you were worthy of acknowledgment. There were badge collectors there of course and they were sitting in a corner trying to look important. I always find that the ones who are distant and frankly rude, are the ones that have never really achieved anything in refereeing and prove their worth by saying things like “It’s Law not Rules” or “It’s field of play, not pitch” Where ever you are reading this you will know someone like that, I guarantee it.

The person who greeted me at this meeting was different, very different. There was something about him that was sincere, fun, friendly and warm. He wanted to know about us and he was interested in where we had been recently, what our next games were and offering little tips like “ Oh their manager is a bit of a pain during the game but he is great afterwards, don’t ignore him but don’t let him dictate your game either” he even told me a great place to park as the ground was hard to find. Not world changing advice but just genuine interest in helping you. I took to him straight away. This was Rich Melinn, “one L and two N’s” he would say with a smile. 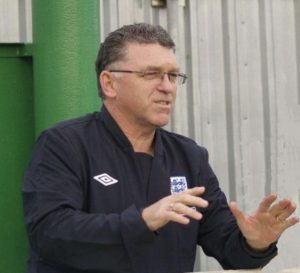 I was brought back down to earth when the meeting started with a stuffy bloke who started telling us that our admin wasn’t good enough and our report writing was poor…”Oh cheers then” I thought to myself, “I have given up my night to be bollocked by you.” This was a trait I would see in some presenters for nearly a decade as these power-crazy fools always started with a negative and wanted to show “who the daddy was.”

I remember a few years later when I was watching a game and this same fool, who still works for the same CFA, was sitting in front of me. Wendy Toms was refereeing the game, he turned and said to another Dinosaur next to him  “I will never accept women in our game, it’s a disgrace the way they are letting this happen” his fellow fossil, who also worked for a CFA replied  “I couldn’t put it better myself.” Both of these were “well respected” in their particular County FA. I knew when I first met them both that they just had that feel about them that they judge everyone and yet their own major flaws were clear to see. No one would point out their flaws to them for fear of reprisals.

Even today I feel very guilty that I never said anything as I was there to watch Wendy as a guest of one of the other Match Officials. I knew though that any challenge to the “flintstones” sitting in front of me would be refereeing suicide, so I bit my lip….again.

The reason I dwelled on the above is because meeting someone who appeared so genuine at these meetings was unusual for me. I was still a bit guarded I suppose and my tolerance level of bullies and condescending people was never high, it still isn’t.

The stuffy bloke finished and up stepped Rich. “Right” he said “What do you want to talk about?” I was dumb struck, every other meeting I had been to we were forced to listen to the info they had chosen to deliver, even if you had heard it at all before at the previous meeting, you had to just sit through it again. I have never understood that psyche.

I know there are subjects that must be covered but most refs want to discuss subjects that made you a better referee not reiterating admin and law. I always found the most interesting parts of these meeting were in the very last part of the meetings when refs were asked “Have you any questions?” Too many times when it was just getting interesting they cut it short and sent us home. Here we are with a chance to do that at the start of the meeting not the end. I was delighted.

We discussed lots of practical stuff like how to manage a wall and how to manage players who were getting wound up, the value of non-verbal communication.

“All this sort of advice will help you deliver a game safely and aid your match control’ Rich would say. I had not heard any one at the time talk like this with passion and belief and I loved it.

This went on for a good 90 minutes and the time flew by. Rich finished with “Thank you all for making this a cracking meeting” and sat down to a big round of applause from all in the room, apart from the badge collectors.

I got the feeling they didn’t like what he had done. I watched them during the meeting and at times they would pull faces as if to disagree with what we said but they had no valid input on it. This is a trait I would come to see from certain people in the “refereeing hierarchy” for years to come. It was their way and no other way. They then wonder why we struggle for refs, instructors and the disenfranchisement continues.

There couldn’t have been a clearer example of what I mean than what happened next. The badge collector stood up and finished the meeting with “next time wear a shirt and tie, too many here are not dressed appropriately. Also please don’t drink alcohol at these meetings” The only contributions to the meeting from him were report writing, admin, wear a shirt and tie and don’t drink.

Rich’s excellent facilitation of the best meeting I have ever attended, had just had the very positive bubble burst by these comments and low and behold, who was the only one in the room with a pint of lager in their hand? Yes, you guessed, yours truly.

Rich would later become a National Senior Instructor for The FA, be one of the most respected referee tutors in the county, be sent abroad representing The FA to tutor and become a PGMOL observer.

The “stuffy one” would later get demoted as a Contributory Observer because of the standard of his work.

My gut instinct back then was spot on. I like to think it still is today.

This was the first meeting with someone that would shape my future for years to come and be instrumental in creating RSUK. 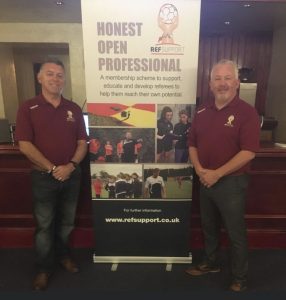 I am splitting this blog into three parts as there is so much Rich has done that has affected RSUK and me.

This will include a great relationship between two RA branches that concluded with a Tri-Athlon of Darts, Pool and Skittles, a trip back from a game that included being chased by a car full of football fans that ends in a face off in a pub car park and the first challenge to RSUK from people who just couldn’t accept change.

Part Two is called Super Man and will be around a game that changed how I refereed for ever. All after advice from Rich