On Tuesday morning we travelled to San Carlos via the Blue Beach war cemetery where lays the graves of several of the fallen including the grave of Colonel H Jones, 2 Para. Visiting San Carlos has triggered my memory. My journey during the conflict saw me get off the SS Canberra with the remainder of the battalion. The Canberra had been floating in the infamous ‘Bomb Alley’ prior to the troops being transported onto land by landing craft supplied by HMS Fearless. We eventually put our feet on the ground at San Carlos beach via the jetty at last light. The jetty is still in place and seeing it has made my memories of that night come back in full. The battalion moved into a defensive position in the high ground around San Carlos in preparation to move towards the enemy positions in the mountain tops around Port Stanley. I carried my Bergen, weapon (SLR 7.62mm) and ammunition weighing around 50/60lb. This included my personal weapon an SLR 7.62mm rifl , 2 hand grenades and a 66mm bunker buster. I can remember digging the trench that night in a peat bog and the bottom took no time to fill with water. It didn’t take long that night for my feet to become wet. The army boots in those days weren’t waterproof and pretty useless. During the evening we receive a warning that we are going to advance forward during the night and begin the march towards the start line for the assault. This was to be a long tab through the night and I prepare myself mentally for the long night ahead. The bergans were to be transported by vehicles and would be collected closer to the start point.

Photo 1 The jetty at San Carlos. 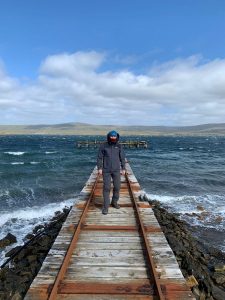 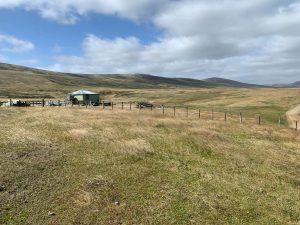 I explore the area where my company dug trenches in a defensive position knowing that we would probably be moving later that night. A trench was still a necessity in case of air attack along the notorious ‘Bomb Alley’. That night we started to move forward and very slowly we started to plod on in the freezing cold wind and rain. The kit was heavy but we were used to it and I remember my concentration levels being sky high as I switched on listening to orders being passed down the line. As a young soldier in a infantry section you don’t receive too much information and I was unaware due to bad weather that there were no helicopters available to move the heavier equipment. I don’t think we had gone too far maybe a couple of miles when we stopped and returned to San Carlos. I found out later that Brigade decided due to the poor weather and lack of helicopter support that they would move us to Fitzroy by boat so we could then join the advance towards Stanley. A typical saying in the army is ‘hurry up and wait’ and over the next couple of days we would do it far too often. The heavy rain had arrived and we were soaked to the skin by the time we arrived back at the jetty to board HMS Fearless. The ship members were great has we found spaces on board the vessel to dry kit and change some clothing. We are told that the plan is to sail us to Fitzroy disembark and that from there the whole Brigade would advance towards Stanley. The Brigade consisted of 1 WG (Welsh Guards) 2 SG (Scots Guards) a battalion of Gurkhas and various support teams. Our battalion alone consisted of approximately 650 men. We sailed the following day, June 6th, but for various reasons not enough landing crafts arrived and only half of the battalion were able to get off. They were taken to Yellow Beach at Bluff Cove after a 30 mile journey with around 300 men packed into two crafts. We visited the area today and it was strange to see where I would have landed if everything had gone to plan. The lads compared the journey to the opening scenes of Saving Private Ryan packed like sardines in rough seas but without the enemy fire. 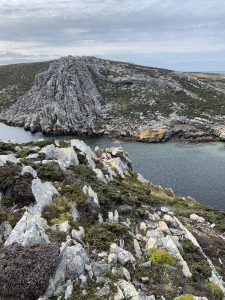 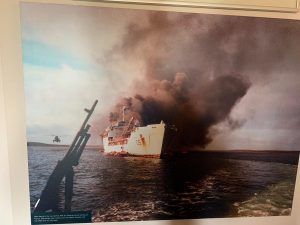 On reaching the bottom of the ladder,I was told to get into a rubber life craft already half full with survivors. I can’t remember exactly but I would say we had around 10 people including at least two with severe burns to the hands. We were eventually pushed away from the side and started to drift away from the ship. I could not see what was going on outside as the craft was covered. However from the commentary I picked up from the person near the opening it was obvious we were floating back towards the stern and the fire. I became aware that a helicopter was overhead and could hear the loud whirring of the rotor blades as we started to float away again towards shore. Footage of this is often shown on Falklands coverage and it is believed that the pilot was Prince Andrew. At some point we came alongside a lifeboat full with fellow guardsmen and our life craft was tied to the back and we were towed to the beach. We were met by personnel from various units already at Fitzroy who helped pull the boats close to the beach. I climbed out of the life craft into water close to the shoreline and waded ankle deep to the beach where I was directed towards the settlement at Fitzroy. 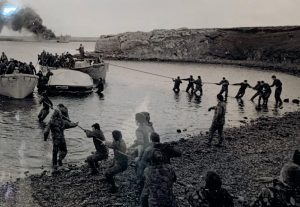 I start to see and recognise other members of the company and see a good friend Jimmy shivering in only a shirt. I haven’t really mentioned the weather much but it was nearly always freezing cold and the biting wind makes it even colder. I am wearing my wet proof jacket over the top of my combat jacket so I gave it to Jimmy along with a cigarette from the one surviving packet in my combat jacket top pocket. The remainder don’t last too long as I share with others on the walk towards Fitzroy. I stopped smoking shortly after the conflict but at that moment I was so glad to be a smoker. On eventually reaching the settlement we were met by non commissioned officers from the company who were taking a register of survivors. In true guards fashion I remember getting into three ranks as if on palace guard so a role call could be held. This was quickly aborted as another Argentinian Skyhawk jet flew above our position so low that you could see the pilot. I did feel real fear at this moment because we were out in the open with no weapons and little cover. I ended up lying in the middle of a field watching as the Skyhawk flew above us. It didn’t hang around long though as we watched and heard a Harriet fighter start to chase it along the rocky headline. We did not witness it but were told later that the Skyhawk had been shot down trying to escape. Eventually I managed to get back together with all survivors from 3 company and we are taken to the sheep pen mentioned previously. It was over the next couple of days that I learn that there were many killed probably including my good friend who was listed as missing. That night and most of the following day we stayed in the sheep pen at Fitzroy. I had no equipment or weapon and only the clothes I was standing in so was hoping to be re kitted out and at least given a new weapon asap. 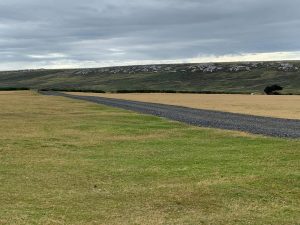 This is the first time that I have ever pieced it all together and now have a photographic memory of my movements before and after the bombing. Writing this allows me to close the book and share with others what we went through. I have no ill feeling towards anybody as it’s war however I do feel that the senior Welsh Guards officer on board the Galahad should have insisted that we were moved off sooner. I certainly have no Ill feeling towards any of the Argentinian soldiers or pilots, they did what I was trained to do and maybe would have had to do if circumstances had been different. Fate meant that I didn’t take part in the final battles around Stanley but I survived the conflict due to my position in the boat at the time of the explosions. I will write about my experiences leading up to the end of the conflict next including visits to Ajax Bay where I guarded POW’s and eventually moving into Port Stanley.